SIMONA KRALJ-FIŠER
I aim to understand the sex-specific evolution of traits; and how these relate to sexual conflict. My research focuses on studing sex differences in behaviour and life history from a variety of perspectives. My focus is on the evolution of sexual size dimorphism and the estimation of sex-specific genetic (co)variation in size-related traits. My research interests relate to the (co)evolution of interactions between the sexes; e.g. male and female mating strategies. I study personality variation and its evolutionary and ecological consequences. I am particularly interested in whether and how sexual selection shapes personality variation. I also study the genetic architecture of personality traits and whether it differs between the sexes. I am investigating how personalities are related to the ability to adapt to a changing environment. My studies explore whether transgenerational plasticity can serve as a short-term response to anthropogenic change. 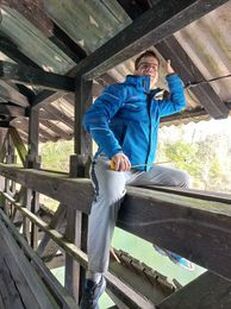 Maternal effects buffer anthropogenic effects in an urban spider
Urban environments pose many challenges for animals, two being increased temperature and pollution. Temperature is a critical factor (especially for ectotherms), and heavy metal toxicity has both short and long term negative effects. The direct effects of both are well understood, but studies on transgenerational effects of maternal exposure on offspring phenotypes, are lacking in invertebrates. Spiders make excellent models for studying transgenerational effects, because they are ectotherms, have short generation times and are top invertebrate predators. We propose to determine whether maternal effects can act as a short term buffer against the effects of increased temperature and heavy metal exposure in Larinioides sclopetarius. We will test whether and how maternal exposure to sub-lethal concentrations of a heavy metal affects offspring phenotype and performance, including resistance to starvation, and whether and how maternal exposure to increased temperatures affects offspring life history traits and behaviour, including their resistance to heat waves. (PhD thesis will be carried out by Rok Golobinek)